Teller & Associates in the News

“With the #MeToo movement as a catalyst, the state Legislature passed a law that bans privileged medical and mental-health records and communications in most discrimination cases from reaching the courtroom during a court process known as discovery.” – Seattle Times

“Court filings, internal documents and interviews with employees illustrate why Microsoft has failed to hire or retain more women: Widespread complaints focus on a culture of casual sexism, a male-dominated hierarchy slow to change, and poor resolution of grievances.” – Seattle Times

We are proud to co-counsel with the ACLU National office and ACLU of Washington on Enstad v. PeaceHealth. This important case will ensure that transgender youth have access to health care without discrimination.

Facing Discrimination: an Effort to End Disparate Treatment at Work

Denise Diskin and Sara Amies are proud to represent Matt Woods in his effort to end employment discrimination at Union Gospel Mission, so that all people, regardless of sexual orientation, have an equal opportunity to contribute their skills and efforts to serving Seattle’s unhoused community.

Elliott, a BNSF locomotive engineer and Union safety officer, reported BNSF’s failure to maintain its track in accordance with Federal safety standards. BNSF failed to fix the defects, so Elliott elevated his report to the Federal government.  A jury found that BNSF targeted Elliott for retaliation because of his safety advocacy, that BNSF management staged an altercation to provide cause to fire Elliott, and faked evidence to support terminating the employment of this 18-year career employee.  Sara Amies co-counseled with James K. Vucinovich, a railroad personal injury lawyer, and proved that BNSF illegally retaliated against Elliott under the Federal Rail Safety Act. After a six-day trial in July 2015, a federal jury in Tacoma reached a unanimous verdict and awarded Elliott $1.25 million, including the statutory maximum of $250,000 in punitive damages.

Religion is not a License to Discriminate

We are proud of our own Denise Diskin, whose advocacy for a transwoman was recognized by the Greater Seattle Business Association. Read about achievement in partnership with Legal Voice here.

What You Can Learn About Sexual Harassment & Legal Settlements

Read the Forbes‘ article to learn more about Sexual Harassment & Legal Settlements, which includes insight from our own Sara Amies.

“cases can settle at any point, even, as she has done, “on the courthouse steps.””

On January 21, 2016, Judge Coughenour of the United States District Court for the Western District of Washington certified the Class Action, but since then he decertified it due to concerns about manageability. The Court has not ruled on the underlying merits of the Class Action.  African American workers on the UW Light Rail project who were not hired after being dispatched, were hired but later terminated, and/or believe they were otherwise treated unfairly now have a very limited period of time to pursue their claims.  They should contact a lawyer right away.  Our office is available at the phone number above. 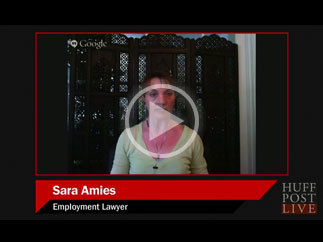 Does Amazon Engage in Brutal and Dehumanizing Workplace Practices?

We are thrilled to announce that Legal Voice and our cooperating law firm Teller & Associates, PLLC have obtained a favorable settlement from the Washington State Health Care Authority on behalf of our client Jessica Sowa-Crowder. The settlement will reimburse Jessica and her family for thousands of dollars of pregnancy medical benefits that were denied due to the so-called “Defense of Marriage Act” (DOMA).

Jessica and her partner Sarah registered as domestic partners in Washington in 2007. Jessica became pregnant with twins in 2010, and applied for pregnancy medical benefits under Washington’s medical assistance program.

Jessica would have qualified for pregnancy medical benefits, which also provide benefits for children in their first year of life, if Sarah had been included in determining the size of the family. However, the state agency that administers the medical assistance program denied Jessica’s application. Because the medical assistance program is partially federally funded, the agency believed that DOMA prevented the agency from treating Jessica and Sarah as a family.

DOMA prohibited the federal government from recognizing relationships of same-sex couples. This ban treated Sarah as a stranger to her own family, and cost her and Jessica thousands of dollars out-of-pocket for pregnancy-related medical expenses.

Legal Voice and cooperating attorney Denise Diskin of Teller & Associates agreed to represent Jessica in appealing this determination. We argued that Sarah must be included in determining the family’s size and that DOMA was an unconstitutional statute.

While the case was pending in Thurston County Superior Court, the U.S. Supreme Court agreed to hear United States v. Windsor, a challenge to DOMA. On June 26, 2013, the Supreme Court held that a key part of DOMA is unconstitutional.

Following the Supreme Court’s ruling, the Health Care Authority agreed to settle the case for $20,000. This settlement will reimburse the Sowa-Crowders for out-of-pocket medical expenses that would have been covered by the medical assistance program. It will also cover a portion of the attorney’s fees and costs incurred by Legal Voice and Teller & Associates in pursuing the appeal.

“I am so happy our firm could support Jessica, Sarah, and their two beautiful children in this hard-won victory,” said Legal Voice cooperating attorney Denise Diskin of Teller & Associates. “This settlement shows that Washington State recognizes the financial hardship disproportionately suffered by LGBT families when they are not treated equally.”

We are so proud of the Sowa-Crowders for standing up and refusing to accept unequal treatment. Jessica and Sarah told us, “we are incredibly thankful for the time and energy that our attorneys put forth in advocating for our family. This has been an extremely emotional journey for us, and we feel that equality has been restored in the State’s agreement to treat us the same as our heterosexual peers.”

Family law issues tend to have long-lasting and everyday ramifications. Property division can have a significant impact on post-divorce financial matters, and the resolution of custody and parenting time will have a tremendous impact on the lives of both children and parents.

As a result, it’s important to have a dedicated family law attorney who can not only provide considered legal advice, but who will also be there to answer any questions that you may have during the course of your matter.

Geoffrey Willson, who was hired by Lucent in 2004 as the senior contract manager on the project in Baghdad, filed the lawsuit; or rather, blew the whistle.

After discovering that Lucent falsely informed the U.S. government that it finished testing the system’s radio transmission sites and the network as a whole in order to get paid faster, Willson also learned that the company was committing accounting fraud. By blowing the whistle on the company he worked for, Willson took a risk but couldn’t turn his back on the truth.

Willson’s Seattle qui tam attorney, Stephen Teller of Teller & Associates, told The Washington Post, “My client was pretty courageous as a whistleblower, and he suffered a lot as a result of it.” As a consequence of reporting the corrupt behavior of Lucent, Willson was fired in retaliation; a time in which he was on vacation in England and Lucent refused to transport him home. Lucent also wrongfully accused Willson of impropriety.

According to The Washington Post, the special inspector general has reported that about $6 billion to $8 billion of the $51 billion in taxpayer money that the U.S. government spent on reconstruction in Iraq has fallen victim to waste, fraud, and abuse.

This case is a reminder of how serious illegal or fraudulent activity against the U.S. government is and that many lives can be affected by such actions. At Teller & Associates, our Washington whistleblower lawyers are dedicated to protecting the rights of individuals who have brought corrupt companies to justice. To learn about your legal rights and options in a qui tam case, please call us today at (206) 324-8969.